An opportunity like this doesn't come around every day. In fact I've never seen it before!

If ever there was an interesting tasting experience to be had or a completely unique and affordable gift for the wine buff in your life.. then this $49.95 gift pack has to be it.

I received a call a few months ago from a small boutique vineyard in the Yarra Valley who thought I might be interested in their Cabernet blend. I really like Cabernet, I'm a big fan of blends and I love boutique, so I went to take a look.

The wine I tried from barrel was great but at the back of the shed were some huge terracotta pots that peaked my interest. I'd never seen them in real life and while I've heard whispers about amphoras being used in winemaking, I had never tried one. So, the winemaker gave me a sample and it completely blew my mind. 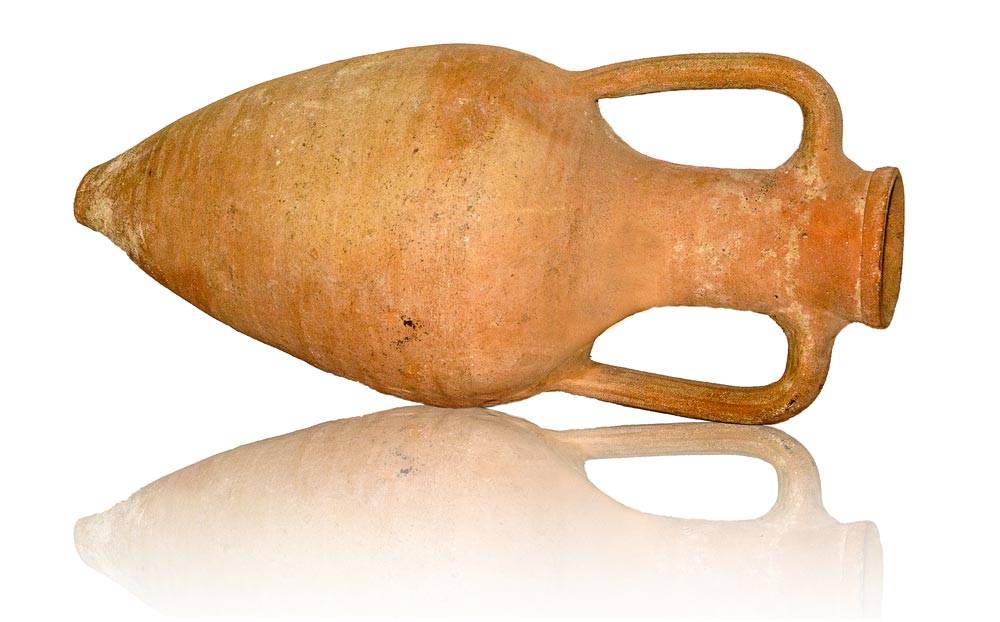 Every now and again a wine arrives on our tasting table that deserves some extra attention. Even after twelve years I occassionally find myself challenged by something completely 'out of the box', but thankfully I have a team of experts I can lean on when a wine like this turns up...

Use the Code: UWIN22 for FREE SHIPPING on any of the gift packs below. 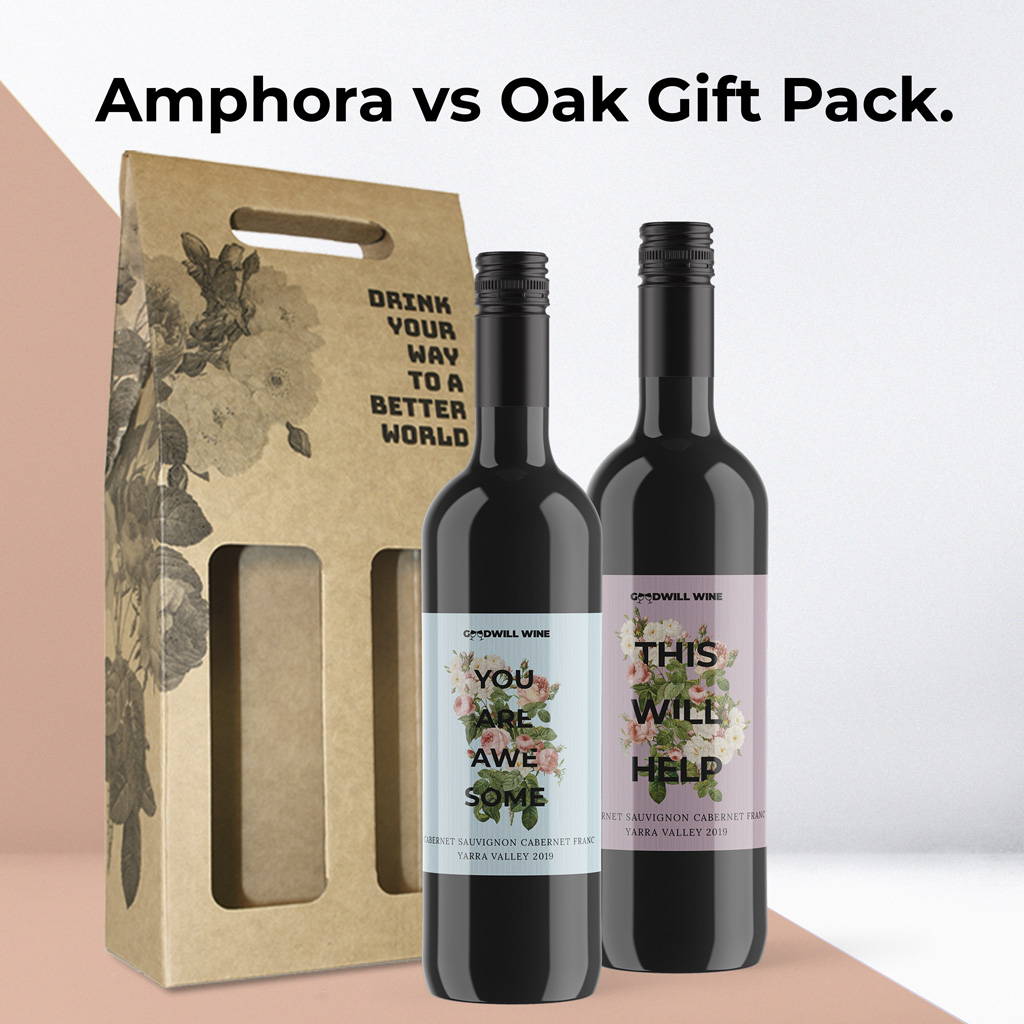 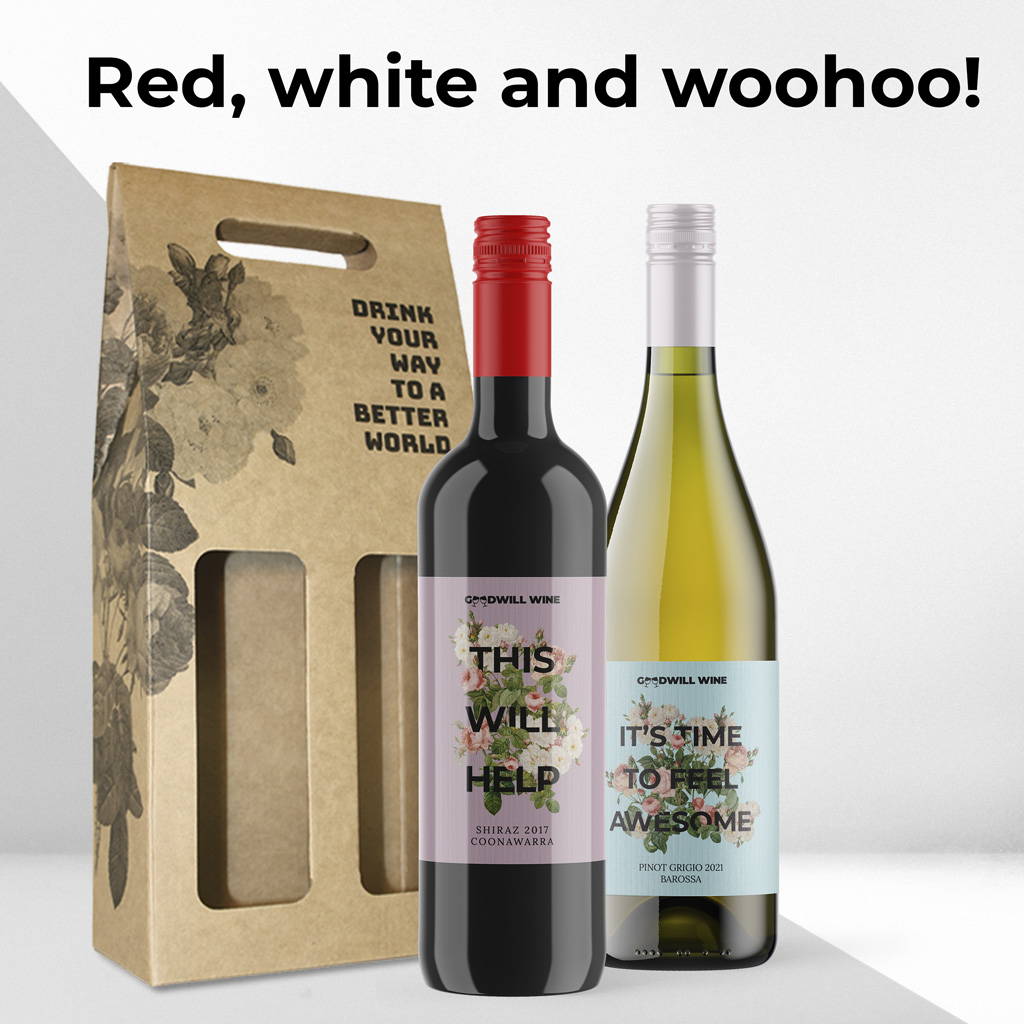 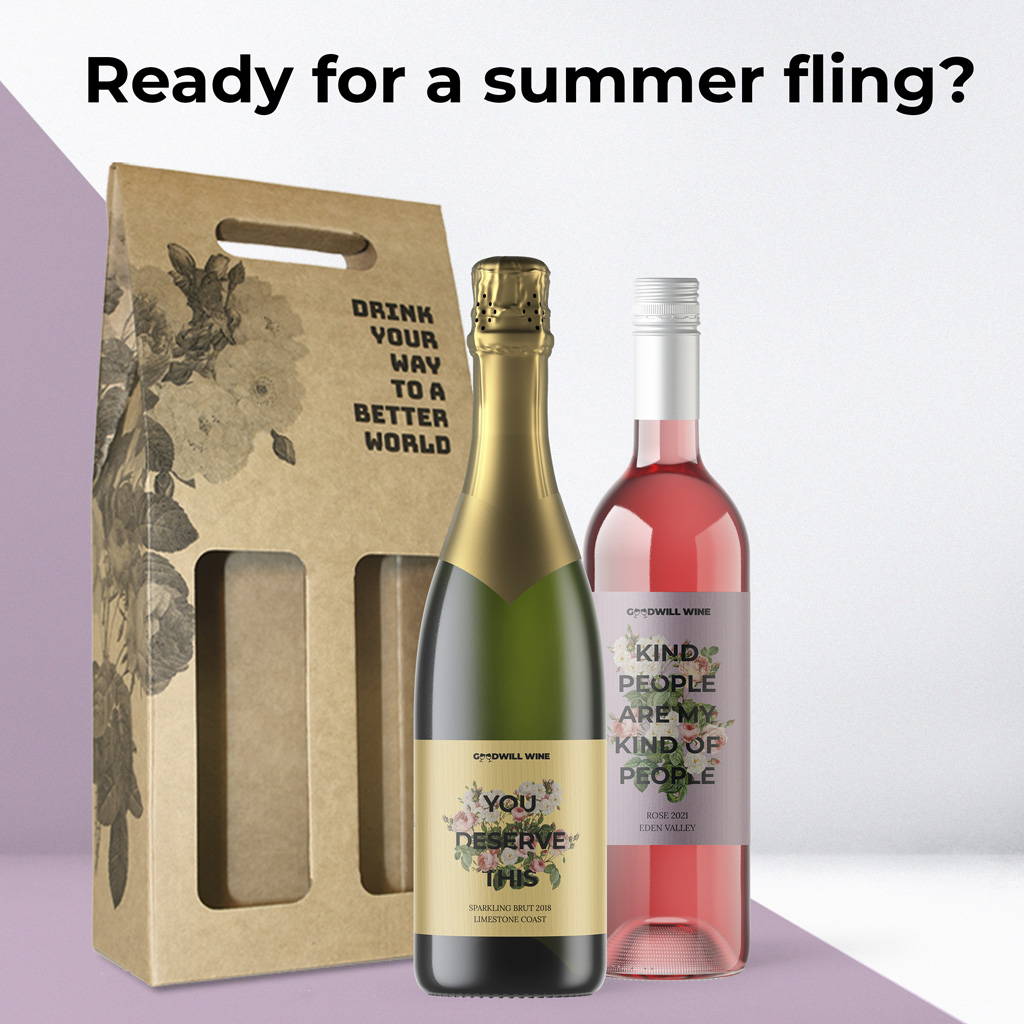 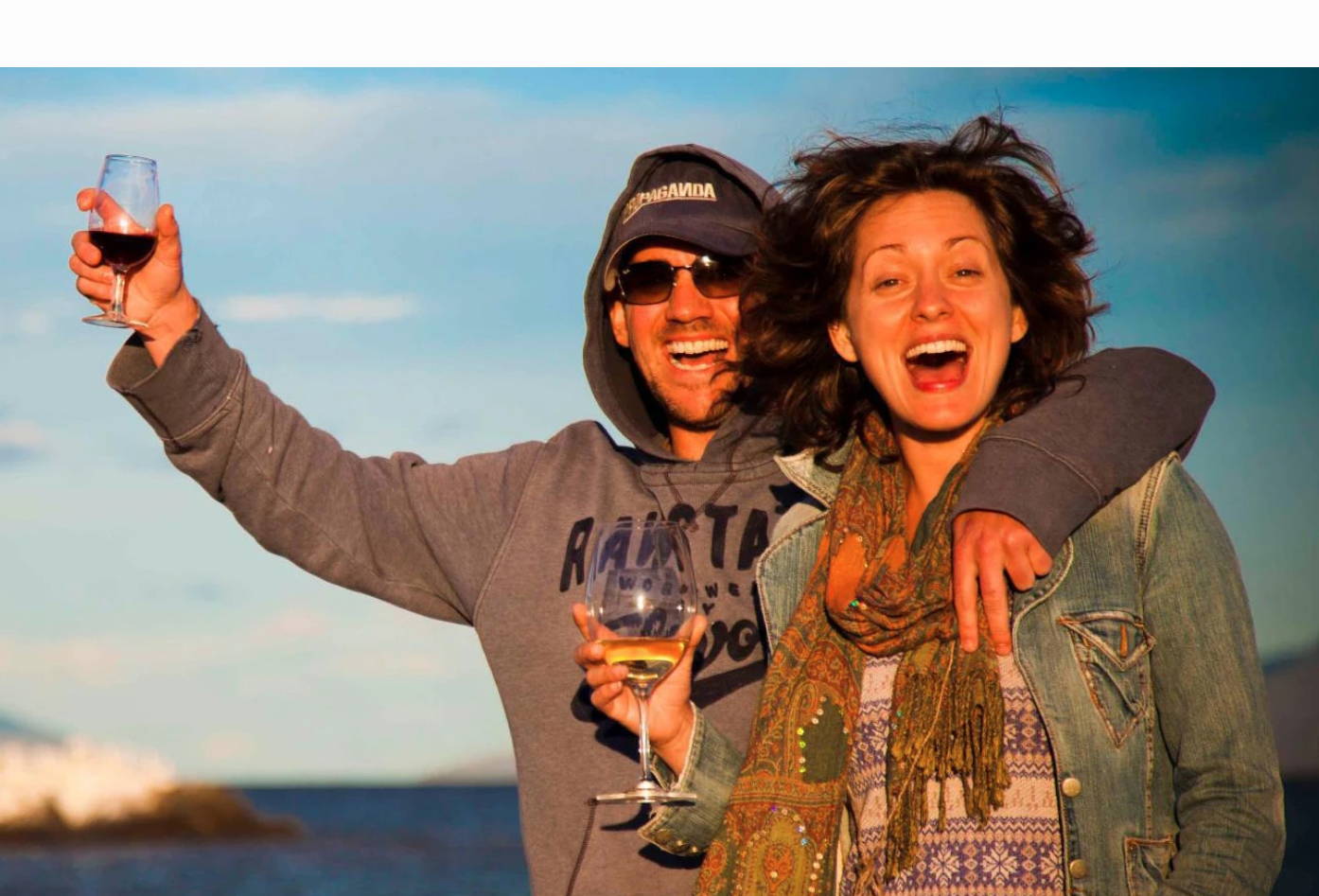 For this particular tasting I called in Clay and Renai from Daylesford Wine Tours. Clay has a particular interest in non-interventionist wines and Renai has a trained palate that is second to none.

They sit in on a lot of our tastings, they are brutally honest and for this particular session were an obvious choice for me. Plus they are a ridiculous amount of fun.. seriously, who doesn't wish they were there when this photo was taken?

Clay took us through the history of amphora winemaking which dates back some 8000 years. Ancient winemakers used to ferment and then transport their wines throughout Europe in enormous terracotta pots, and it is a style that has become increasingly popular in recent years.

Apparently, this revival has been driven by purists who feel that the neutral clay of the amphora allows the aromas and flavours of the grapes to reveal their best. I happen to love how oak interacts with both red and white wines but after tasting these two bottles and having the opportunity to compare them both in 'realtime', I can see the purist's point. The two wines are vastly different. The amphora produced a much brighter wine with a load more acid and it kept opening up and revealing its secrets over the next three days! This was such an exciting comparison of two completely fascinating wines.

HERE'S WHAT CLAY AND RENAI HAD TO SAY

The same grapes, the same maker - two very different and distinctive vinos. Twinsies but not.

The use of amphora in creating this wine feels to us that it has enabled an honest cohesion of the two varietals. As the terracotta does not typically impart its own flavours, the fruits are given the liberty to be themselves, encouraging a sense of playfulness. Minerality and bright fruit are in the spotlight here. This is best decanted or at least allowed to breathe to allow the subtleties to pop. Expect this little number to take on a life of its own as it continues to open up and evolve. This is an alluring and sexy drop we wanted to make last as looong as possible and with its sizeable length this was easily done.

Think Julia Roberts in the 90’s movie Pretty Woman, vivacious and spirited who in the end becomes the epitome of sophistication. The only “big BIG mistake” is not sharing the love with that special other.

And the oak version?

The oak version favours more of the herbaceous spicy notes in contrast to the amphora's fruit and minerality driven finish. It has all the flavour benefits of Cabernet Sauvignon with the lightness and spice of Cabernet Franc. We found this drop had more of a delicious punch than a lingering savour. The spices were like stumbling upon a brass band marching in all it’s glory. Combine this with gutsy herbaciousness, fruit and dusty tannins and this Cab combination proved to be a delectable treat. 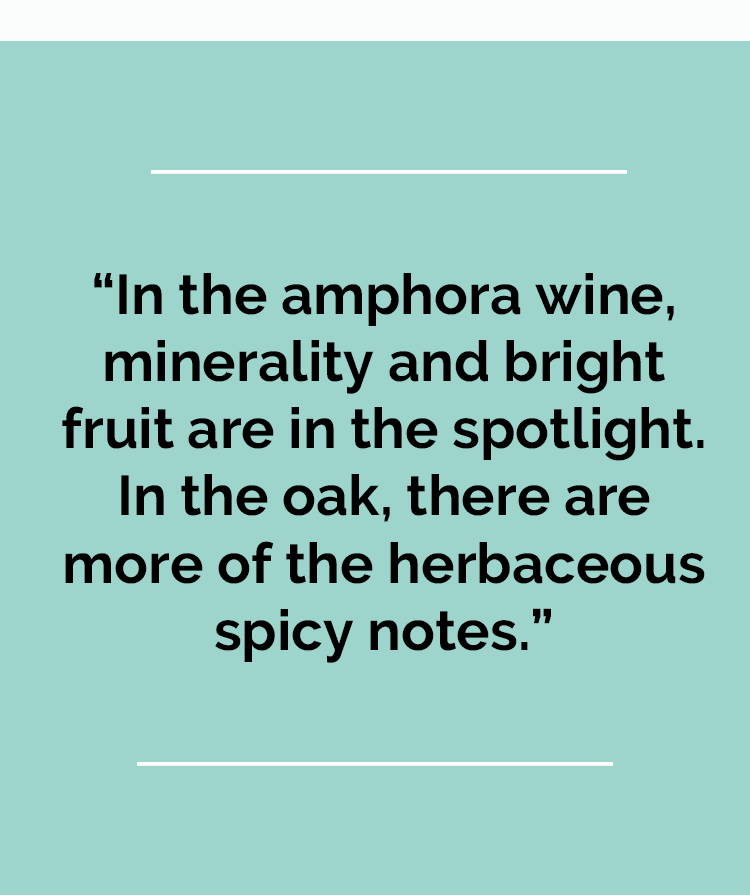 In a nutshell, here’s what we think.

For us the amphora highlighted a more feminine and complex array of aromas that continued to develop over several days. In addition there’s the raunchy chilli on the finish which is not present with the french oak. Although both varietals have high acidity and fine tannins, the amphora tends to pack more punch in its textural mouth feel.

We decided to cover the bottles before tasting to conceal their identity and protect ourselves from bias. In the end we loved the experience of tasting both versions of wine against each other. This was an unusual opportunity for us to comparative taste two distinct winemaking styles. In the end we enjoyed both wines but we were more intrigued and titillated by the evolving dynamics of the amphora.

This is a very rare and memorable experience for any wine buff and is available in our beautiful gift packs for only $49.95.